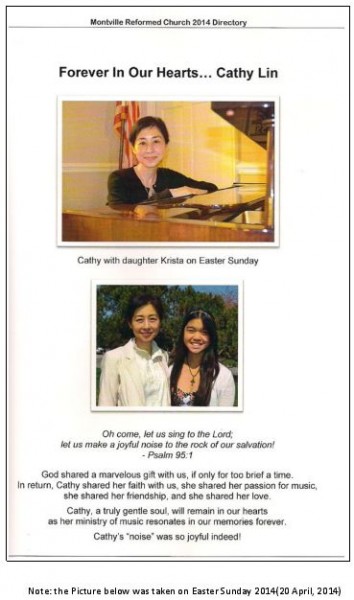 Cathy was born on 29th of October 1962 in Taipei, Taiwan. She is the eldest daughter of Professor Kent Lin of  Taiwan University and Professor Joy Tsai of Taiwan Normal University. She grew up in a Christian family and was baptized in the Chong-Lune church in Taipei. During her youth, she attended kindergarten, primary school, middle school in Taiwan. In 1977 her family (parents and three siblings) emigrated to the U.S. She completed high school and started college (University of Washington) in Seattle. As a sophomore, she transferred to Rutgers University in New Jersey and obtained a master’s degree in music (MM) in 1989. She married in 1990 and gave birth to a daughter, Krista. She lived on Long Island until 2005 before moving back to Denville, New Jersey. She has previously served as the Parsippany Presbyterian Church. Most recently she served as the Montville Reformed Church music director and also taught piano privately at her home studio. She devoted her energy and life to raising Krista, who gave her immense joy and hope.

In July 2013, she was suddenly diagnosed with pancreatic cancer and began undergoing chemotherapy and radiotherapy. At the end of 2013, she decided not to continue the second phase of chemotherapy but instead to proceed with alternative natural therapy so that she could continue to work. During early May 2014 her health conditions deteriorated and she passed away during the early morning of June 4 at home. Before her spirit departed, her immediate family (parents, two brothers and daughter Krista) were all by her side praying for her journey.

Cathy was very close to the Montville Reformed Church family, serving the church passionately with all her strength. After her passing, Cathy’s wish is to be forever close to the Lord’s chapel. Cathy’s innocent, perseverance, faith, love and hope permeated her life and gave great witness to Lord Jesus Christ.