In her 15 years at Little, Brown Books for Young Readers, Alvina Ling has edited books that have won Newbery and Caldecott Honors, the Boston Globe-HornBook Award, the Coretta Scott King Medal, the E.B. White Read-Aloud Award, the Golden Kite, and several that have made the New York Times Best Illustrated list. But she has one distinction very few editors can claim: she edited a book in which she was one of the main characters—The Year of the Dog, by Grace Lin (LBYR, 2006), a middle-grade novel that is an autobiographical slice of Grace and Alvina’s childhood friendship.

“Years ago, when we were moving toward building our fiction list, I told Grace, ‘If you ever write a novel…’ and she surprised me by saying, ‘Actually, I have an idea,’ ” Ling recalled. “She didn’t tell me at the time what it was about, but the whole book was inspired by our childhood. Yes, I was a character, but it was so delightful, everyone loved it. Of course, I am biased, but it did sell really well.”

It was particularly satisfying, Ling said, because it was the kind of book that she and Grace, who met in elementary school in upstate New York, would have devoured as children: a book featuring characters who looked like them. Asian-Americans were few and far between in the books Ling grew up on. “We craved stories about girls with dark hair.”

That did not immediately lead to dreams of a career in publishing. At UC-Berkeley, she majored in mass communication because the degree let each student create his or her own curriculum. She also worked at the campus radio station and for a student magazine, but after graduating she still hadn’t settled on a career, so she took a job teaching English in Taiwan, where her parents were born. “I was buying time, but while I was there someone said to me, ‘Well, you’re always reading. What about publishing?’ ”

Publishing jobs in 1990s California, however, were scarce. Ling took a course in copy editing, “but I was really terrible at it.” She read her way through Making It in Book Publishing, by Leonard Mogel (“which I still have, by the way”), which advised aspiring editors to learn the business by working in libraries or bookstores. She found a job at Barnes & Noble in Oakland. “I learned so much—the most important thing being that I was always gravitating toward the children’s section,” she said. “It didn’t take long for me to realize that was where my passion was.”

Taking the next step meant moving closer to publishing centers in either New York or Boston. Ling didn’t know anyone in New York, but an old friend had put down post-college roots in Massachusetts: Grace Lin. The two had lost touch during college. Lin graduated from the Rhode Island School of Design and moved to Boston, where she received a contract for her first picture book, Ugly Vegetables (Charlesbridge, 1999). The two became roommates.

Lin helped her friend get an internship at Charlesbridge; a contact at B&N led her to another one at the Horn Book Guide. While there, a supervisor mentioned an opening for an assistant at Little, Brown. “I had interviewed a stream of well-meaning but somewhat mousy candidates in gray suits, and Alvina walked in with a bright purple outfit, an irresistible smile, and a contagious enthusiasm for and curiosity about children’s books,” said Megan Tingley, now LBYR’s publisher. “I knew from the day she started she was going to be a star.”

For Ling, the deal was sealed by Tingley’s upfront commitment to publishing books about underrepresented characters. When Ling began acquiring books herself, diversity became a hallmark of her list. “I’ve definitely made it my mission,” she said.

“The lack of diversity has been going on forever, but it bubbles up every five years,” Ling said. “Where we have improved is that we have a growing library of diverse books, but there are still not enough in terms of overall percentage, and there is still the ‘discoverability’ issue.” She cites a Little, Brown intern of Mexican-American heritage who complained that most books about kids who shared her ethnic background were usually “dark books about gangs.” “She was our audience, and she had not even heard of Diana Lopez, whose Confetti Girl has sold quite well for us,” Ling said. “It’s not enough to acquire these books; you have to get them attention, too.”

It helps when booksellers enthusiastically support a book, as Joe Monti, then the children’s buyer at B&N, did with Lin’s first novel, The Year of the Dog. “I really have to credit him with helping it take off because it was a quiet book, and a multicultural book, but he put it on every promotion,” Ling said. “They were modeling it and, because I used to work at B&N, I knew what that meant. It was big.”

Awards also help. Lin’s third novel won a 2012 Newbery Honor, which gives a book enormous visibility. “I wanted to create books that became classics and I think Where the Mountain Meets the Moon is probably my best shot,” Ling said. “But it’s just as rewarding that it’s been embraced by so many people. Yes, it’s about an Asian girl, but it’s also just a great, universal story. We need diverse books, but we also need readers who will embrace all sorts of stories.”

Books on the nightstand: Out of My Mind by Sharon Draper; The Port Chicago 50: Disaster, Mutiny, and the Fight for Civil Rights by Steve Sheinkin; Colorless Tsukuru Tazaki and His Years of Pilgrimage by Haruki Murakami

Shark vs. Train by Chris Barton and Tom Lichtenheld

Wolfie the Bunny by Ame Dyckman, illustrated by Zachariah OHora

Grace Lin: The Year of the Dog and Where the Mountain Meets the Moon (Newbery Honor)

The Candymakers by Wendy Mass

The Truth About Twinkie Pie by Kat Yeh

The Diviners by Libba Bray

The Daughter of Smoke & Bone trilogy by Laini Taylor

The Young World by Chris Weitz

The I Hunt Killers trilogy by Barry Lyga

The Walled City by Ryan Graudin

North of Beautiful by Justina Chen 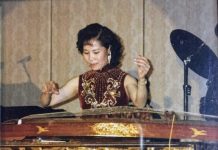