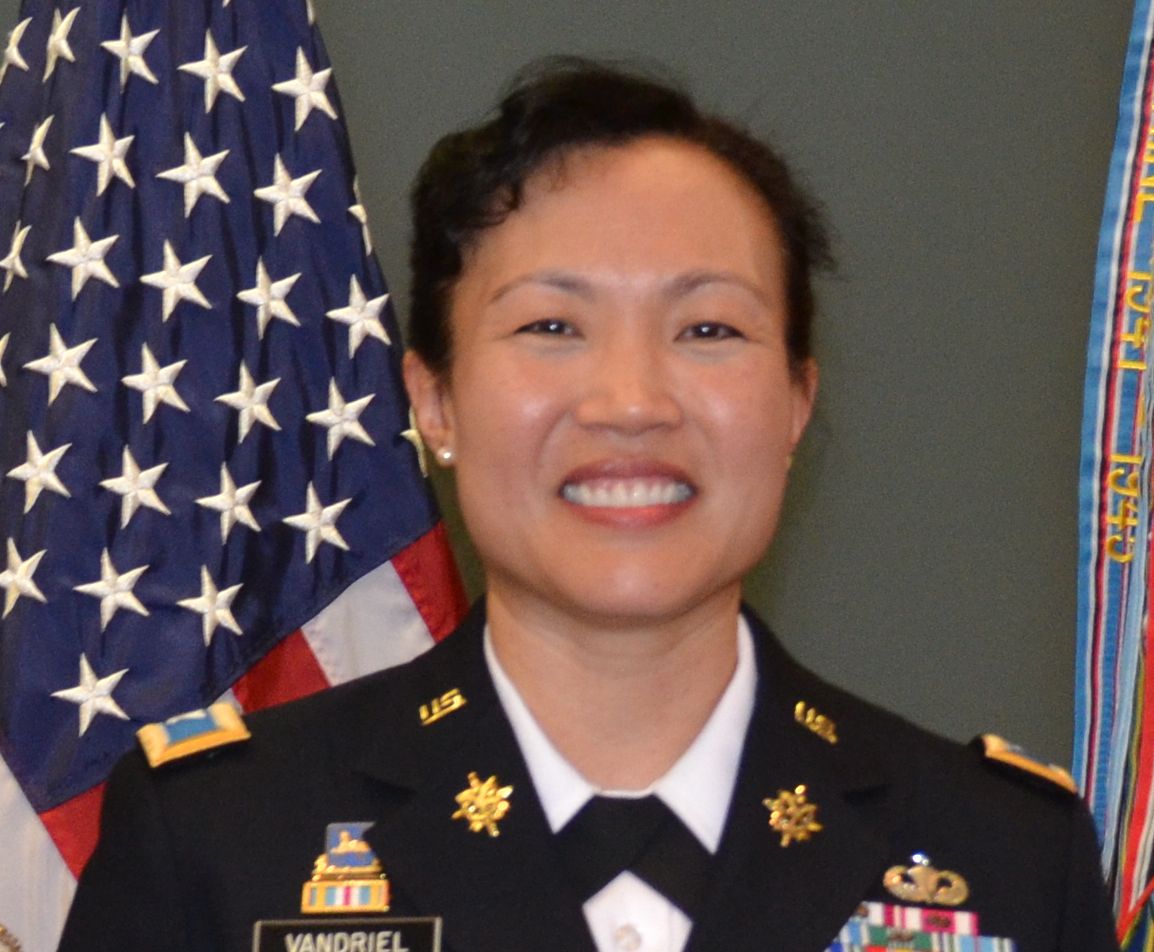 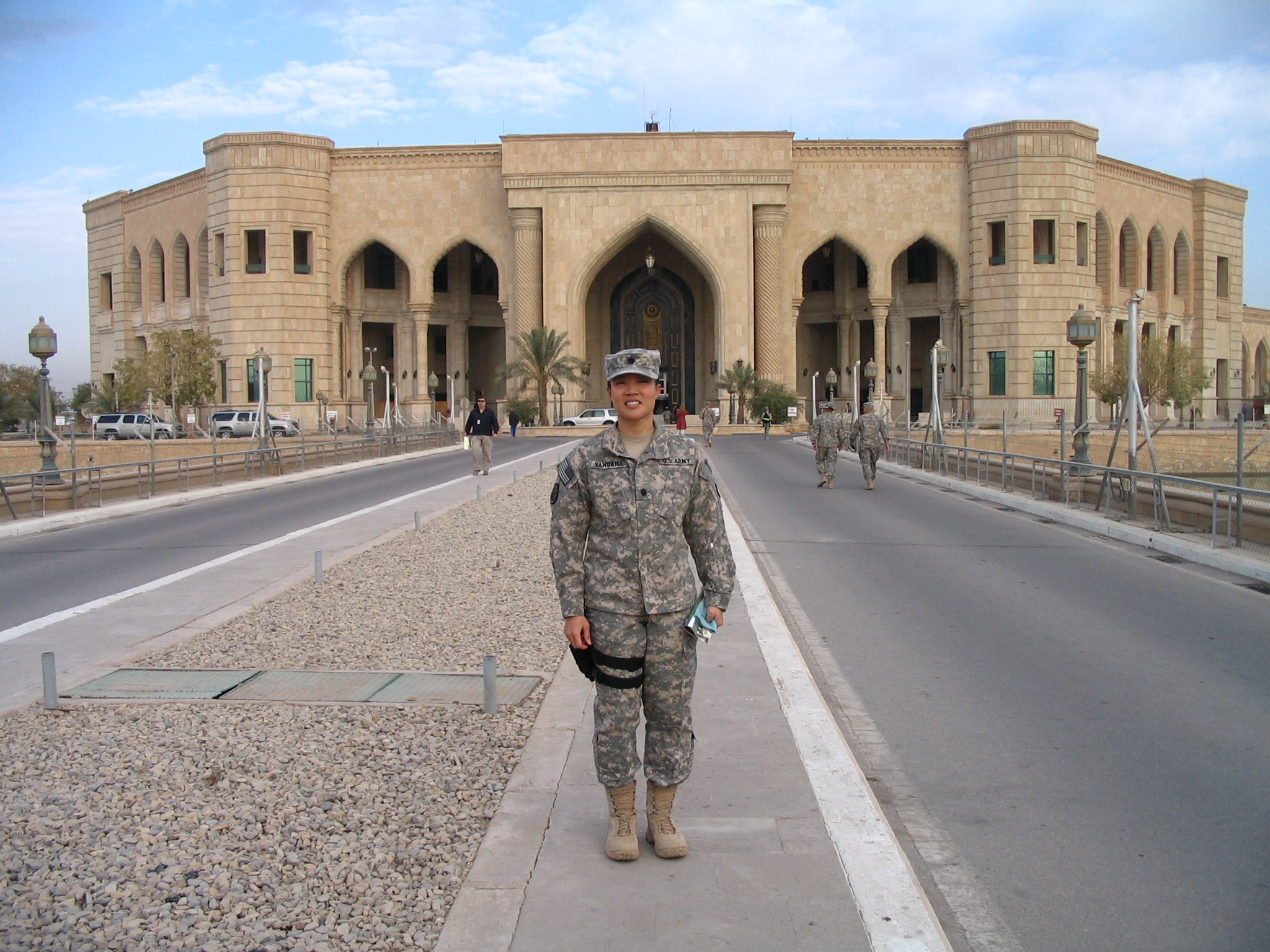 While many Taiwanese-Americans have succeeded in a number of professional areas, very few have joined the U.S. military, and even fewer have chosen the U.S. military as a career.  Martha (Hsu) VanDriel is a notable exception. In 1991, she became the first Taiwanese-American woman to graduate from the U.S. Military Academy at West Point, graduating in the top 10% of her class.  She then spent over 26 years as a U.S. Army officer, excelling in numerous leadership positions and eventually reaching the rank of Colonel.  Her last assignment before she retired in September 2017 was at the Office of the Secretary of Defense in the Pentagon.

Martha’s parents came to the United States in the early 1960s as graduate students from Taiwan, and they met and married in California.  But even before Martha was born, her father, Henry Hsu, had written several letters to his family in Taiwan that were critical of the ruling KMT government. The government intercepted the letters, placed Henry on a blacklist, and harassed Henry’s family so badly that they told him, “For your safety, do not return to Taiwan. And for our safety, please do not communicate with us any longer.” So Henry refocused his future on staying in the United States, where he could earn a living, raise his family in safety, and express his political views peacefully and without fear of persecution.  Martha’s parents became U.S. citizens, and as their children grew, they taught their children that they should always be thankful that they lived in America.

This experience made a deep impression on Martha as she grew up in South Pasadena, CA, where she excelled in high school.  As a straight-A student, Academic Decathelon award winner, head cheerleader, editor of the school literary magazine, and swim team member, she was voted “Most Intelligent” and “Most Likely To Succeed” by her high school class.  As she looked at potential colleges to attend, many people encouraged her to become a doctor, a lawyer, or an engineer – the usual accepted occupations for many Asian Americans.  But as Martha later noted, “I wanted to be different…I didn’t want to be typical.  I felt that I had something to prove, and I wanted to gain the respect of others.  So when I learned about West Point and its famous graduates, and how you couldn’t go there just because you did well academically; you had to do well academically, physically, and leadership-wise, I was intrigued.  I also wanted to give something back to this country that had given my family so much.” But the difficult academic, physical, and leadership discipline at West Point also scared Martha, because these factors had historically caused about 30% of each West Point freshman class to drop out before graduation. In the end, Martha’s Christian faith led her to accept West Point’s offer of admission: “I knew that this is where God wanted me to be, and this helped me to stay at West Point, especially when things were very difficult during my first year there.”

In 1991, Martha graduated in the top 10% of her West Point class with a Bachelor of Sciences Degree in International Relations and International Strategic History, and she was commissioned as a Second Lieutenant in the Military Intelligence branch of the U.S. Army.  Her early career was marked by success, as she was the Honor Graduate of her Military Intelligence Officer Basic Course and of several other training courses.  However, it was also marked by overcoming fear and physical hardship, as Martha’s first assignment was at Fort Bragg, NC, which is known as “The Home of the Airborne” – meaning that Martha would have to learn how to lead her soldiers while jumping out of military airplanes.  But Martha persevered, eventually becoming a “jumpmaster” and earning a Senior Parachutist badge.  She would also deploy to Haiti in 1994 during Operation UPHOLD DEMOCRACY, and then was subsequently assigned to South Korea, where she led over 100 U.S. and South Korean soldiers as a Company Commander.

After company command, Martha married another Army officer, Michael VanDriel, and was accepted into an Army program that paid for her Master’s degree so that she could return to West Point to teach cadets.  Therefore, in 2000, Martha earned a M.A. in National Security Studies from UNC-Chapel Hill, then returned to West Point to teach International Relations, International Security Studies, and the Politics and Strategy of Cyberwarfare.  During her assignment at West Point, she had two sons, Matthew and Micah; and also transferred from the Military Intelligence branch into a new Strategy, Plans, and Policy branch.  Because this branch was related to her Masters degree and because she enjoyed this area, Martha’s career flourished at subsequent assignments over the next decade, as she developed and worked on contingency war plans in South Korea, U.S. Pacific Command, and Iraq.  During this time, one of her most noteworthy accomplishments occurred in March 2011, when she was sent to Okinawa in response to the tragic tsunami and nuclear emergency in Japan.  As a planner for Operation PACIFIC PASSAGE, Martha was tasked to help quickly develop a plan for the emergency evacuation of thousands of American citizens from Tokyo in case the Fukushima Daiichi nuclear power plant melted down.  Her initiative to plan, create, and write the main concept of the evacuation plan under severe time constraints earned her a special award from her commander.  Fortunately, the plan never had to be executed, but Martha looked at this experience as confirmation that her decision to become a U.S. Army officer was the right one:  “I believe that being an Army officer is my calling from God; there is a good purpose to my life and to what I am doing.  I am so blessed; how many other people can say the same?”

In 2011, now a Lieutenant Colonel, Martha was assigned as the first-ever Chief of Plans and Policy for the newly created U.S. Army Cyber Command at Fort Belvoir, VA.  Because of her integrating skills, she was tasked to lead the rapid multi-year build of the Army’s 41 Cyber Mission Force teams, effectively coordinating across the organization and with multiple higher and subordinate organizations, which resulted in the fielding of the Army’s first-ever operational cyberspace forces ahead of schedule. Her success led to her promotion to Colonel and her assignment to the Pentagon’s Office of the Secretary of Defense, Office of the Principal Cyber Advisor, where she successfully coordinated across nearly 30 disparate organizations to resolve cyberspace manning, training, and readiness issues.

In September 2017, Colonel Martha S.H. VanDriel retired from the U.S. Army after over 26 years of service. When asked to reflect upon her military career as a Taiwanese-American, she said, “One of the things that I didn’t expect, but which I’m very thankful for, is how my graduation from West Point has honored my parents.  First, in retrospect, I think most of my parents’ Taiwanese friends thought that my parents were a little crazy to let me go to West Point.  But for years now, when Taiwanese folks meet my parents for the first time, many of them will say with admiration, “Oh, you’re the one whose daughter went to West Point!”  Second, over the years, I’ve come to understand that in America, going to West Point is viewed as one of the highest forms of public service to our country, so it has placed my parents in a realm of respect among American society that I didn’t expect.  For example, when my father used to go jogging at our local high school running track early in the morning, several times, complete strangers would come up to him and say, ‘I heard from other joggers that your daughter went to West Point; how is she?’  So I am glad that in the end, this experience has given my parents the respect of others and made them proud of me, and that is an incredibly wonderful blessing.” 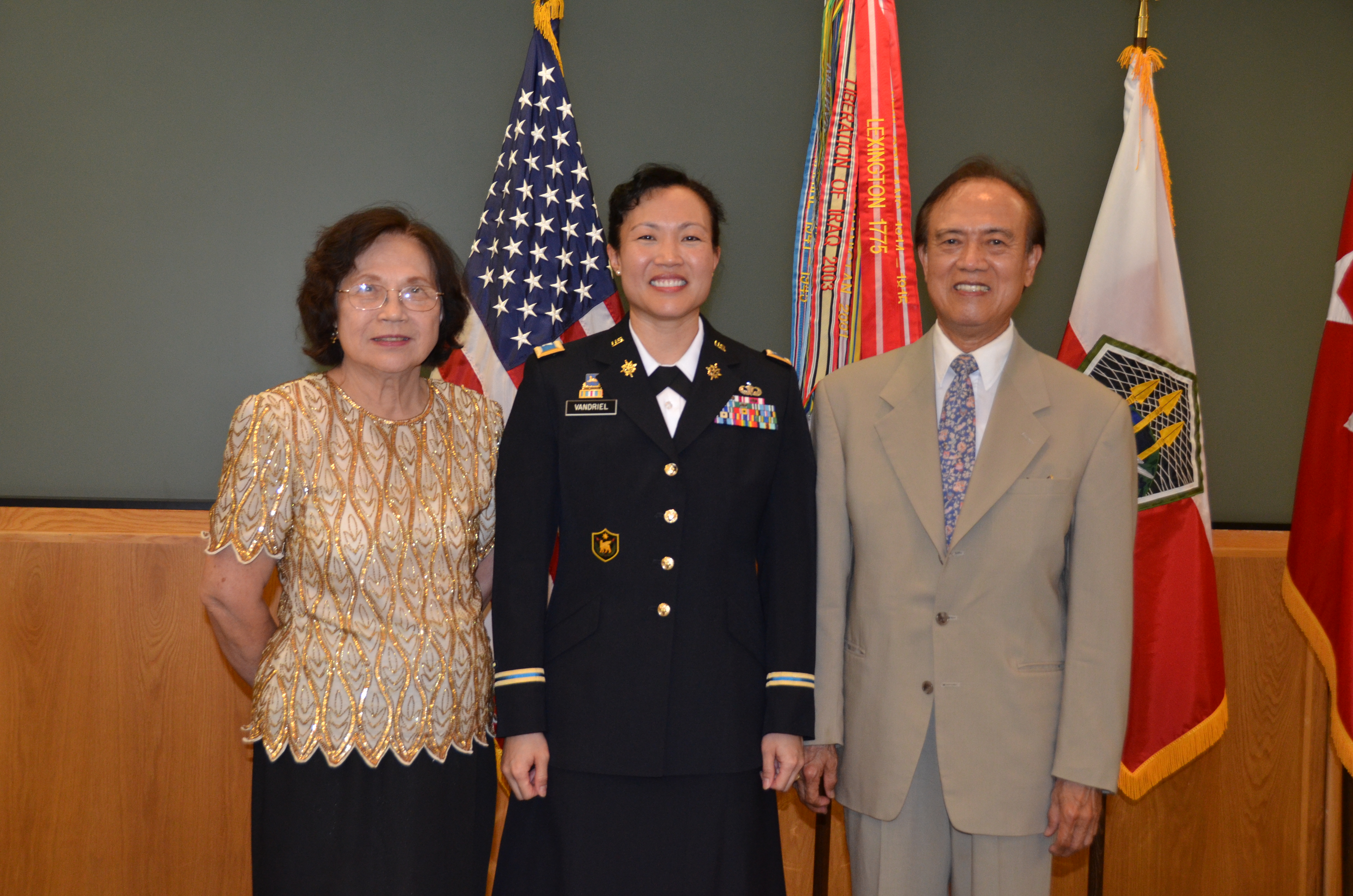 Ms. Martha Hsu VanDriel with her parents at her promotion ceremony to Colonel at the US Army Cyber Command Headquarters at Fort Belvoir, VA, in 2013