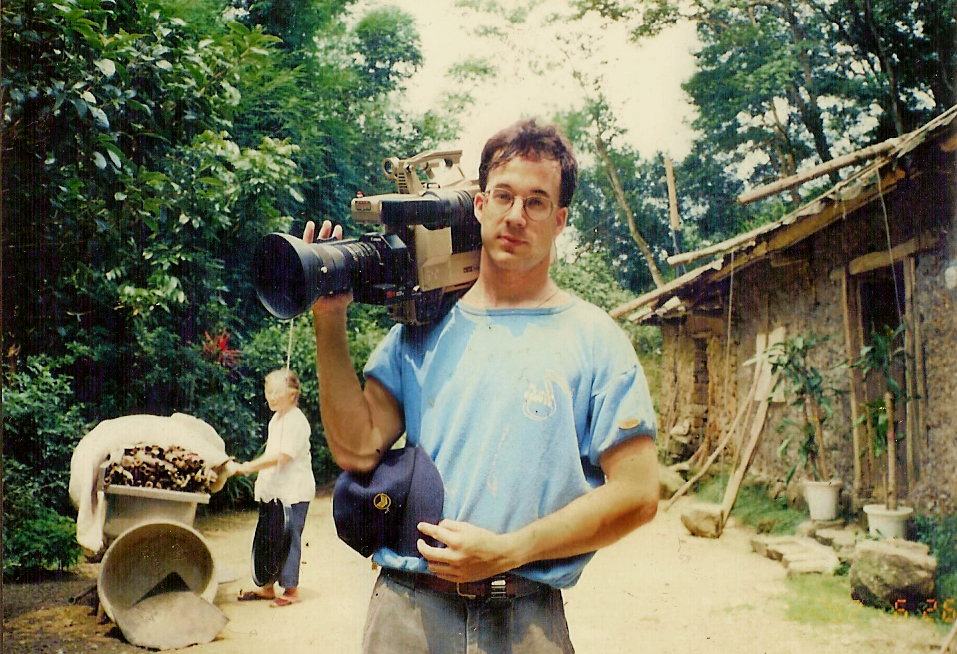 An American-Born Taiwanese: An interview with TC Locke 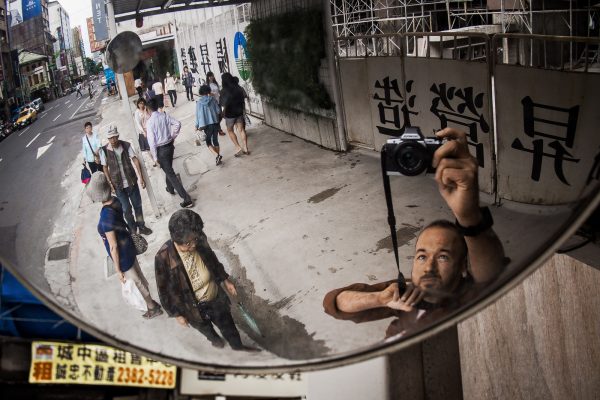 One of TC Locke’s photographsI first met TC Locke many years ago on a photography walk in Taipei. At the time, I only knew him through his photos and his blog, Poagao.org. After a bit more research I learned more about his colorful life and have been amazed by his talents as a photographer, musician, filmmaker, and his love for Taiwan, which led to his decision to seek Taiwanese citizenship. Knowing his unique experience as an American-born Taiwanese living in Taiwan, I asked to interview him for TaiwaneseCulture.org, and he kindly agreed.

TC Locke, also known as TC Lin or Lin Dao-ming (Chinese: 林道明), was born in the United States and moved to Taiwan in 1988 to study Chinese. After graduating from college in the U.S. in 1991, Locke moved back to Taiwan permanently to begin the naturalization process of becoming a Taiwanese citizen. Once a Taiwanese citizen, TC was called up to serve in the Taiwanese military. His book, Barbarian at the Gate, which was published in 2014, chronicled his life as a conscript in the Taiwanese army.

This is his story.

How does an American kid who grew up in various small towns in the U.S. end up in Taiwan?

I originally came here as an exchange student to study Chinese in the late 1980s. I soon became aware of a strong affinity for Taiwan and stayed.

What made you decide to study Chinese here?

I knew that I needed to be in a place where the language was spoken if I really wanted to attain any kind of fluency. At the time the exchange program offered two places to study Mandarin; one was Taichung, Taiwan, and the other was Harbin, China. Being from Florida, I have an aversion to extremely cold weather; Taiwan’s climate is actually very similar to where I grew up. On top of that, I’d heard that foreign students in the PRC were basically sequestered together in dormitories, away from the general public. This was a deal-breaker for me. It was just as well I didn’t go to China at that time, as many student programs were later cancelled following the Tiananmen massacre. I met some of the Western students who had originally wanted to study in Beijing, and they were bitterly disappointed at not being able to go.

Well, studying Chinese and immigrating are two separate issues. The main reason I renounced my U.S. citizenship at that point was that the Taiwanese government required it for immigration. I desired to make Taiwan my home, and at that time there was nothing like permanent residence here (one might even say the current “permanent residence” status is still too restrictive, but that is for others to argue). In any case, I figured that if I was going to live here, I didn’t want to have to keep jumping through hoops in order to stay. I’d never have felt at home here under those circumstances. If you can’t even help but see yourself as an outsider, how can anyone else fail to do so as well? 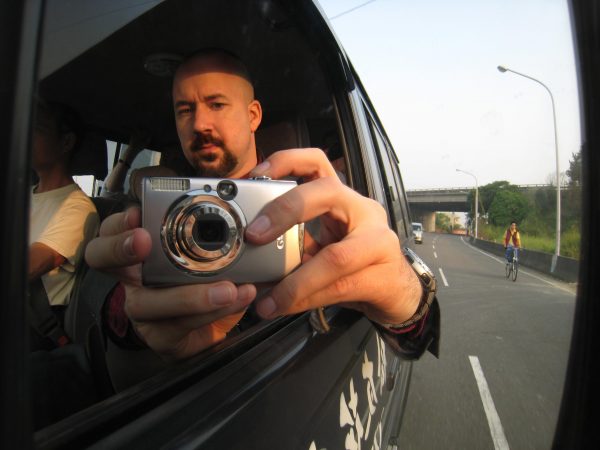 What were some of the most powerful moments for you when you first arrived  in Taiwan?

Taiwan was a different place then; it’s been so long that I can hardly recall, but I do remember being happy to be among people who were using Chinese in a natural fashion rather than a classroom environment. It was refreshing and inspiring. I just found everything fascinating; every corner seemed to hold an interest, and of course this was an ideal environment for a young photographer.

Was it a surprise when you were called up to serve in the army?

Not really, though many of my Taiwanese co-workers had claimed that I wouldn’t be required to serve due to my race. Then again, such a belief is rather racist, and says more about those particular co-workers than they might be comfortable with. 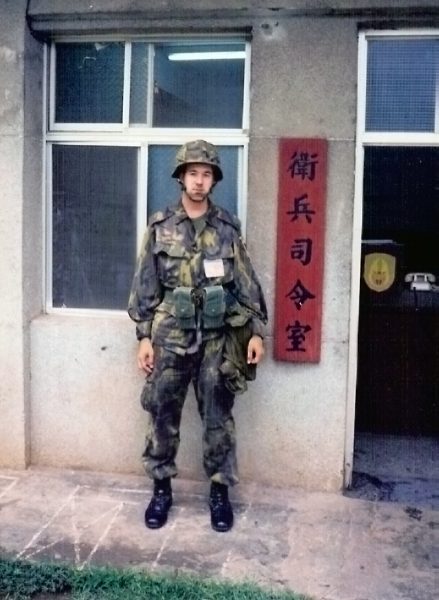 Did you ever consider just not showing up?

Of course not. That would be insane. Why would I want to go into hiding for the rest of my life over something like that?

How would you describe your time spent in the army?

It’s difficult to sum up years of one’s life in a few sentences, but I’d have to say it was… different and educational, in that it was as close to being completely immersed in life as a Taiwanese person as I’d experienced up to that point. Through the various challenges I faced during that time, I learned a lot about the society and culture as well as about myself, both good and bad. But you’d have to read my book to get a more complete view of my experiences in the army.

Have you discovered any advantages of having Taiwanese citizenship, rather than American?

There are many, but being able to live and work freely as I desire would top the list. I can travel pretty much anywhere I want with a Taiwanese passport. In fact, I can’t really think of any particular advantage to holding U.S. citizenship, and many downsides, including taxes, banking regulations and other red tape, and so on. I could have regained U.S. citizenship a long time ago and held dual citizenship, but I’ve chosen not to because I can’t really see any point in doing so. Many Taiwanese people see it as a status symbol, but I’m not terribly interested in that kind of thing. Some U.S. customs officials seem to have taken personal offense that I renounced my U.S. citizenship, but for some reason only the white male ones; none of the Asian, Latino, or African-American officials ever gave me any grief over it.

In your book, you described how the environment in the military as the place where you were most accepted as a regular member. Why do you think you were readily accepted by the community in the army?

Probably because most of the people there were able to get to know me; the military is more or less a closed environment, though it is home to men (at that time the military was almost exclusively male, at least on the bases where I served) from all walks of life, whereas in general society I’m pretty much invisible; nobody knows me, and for all most strangers know, I’ve just stepped off the airport bus; only my friends, family, co-workers and acquaintances know I’m actually Taiwanese. In the army, everyone was simply trying to get by, including me. Everyone knew who I was, accepted it and went on with their lives, as people do. It made it easier for me later on when I could spot which Taiwanese people were the most racist judging by how much they fawned over me, especially in English, and let me better appreciate those honest, down-to-earth folks who treat everyone the same.

Has the experience serving in the army changed you? If so, how?

Again, it was so long ago it’s difficult to describe, but I do recall friends and co-workers saying I’d changed after that experience; they said I seemed more at ease in my surroundings. One of my friends put it this way: “You get it now.” For my part, I did feel more comfortable and engaged in society in general; military service did far more to help me integrate into Taiwanese society than simply obtaining an ID card. 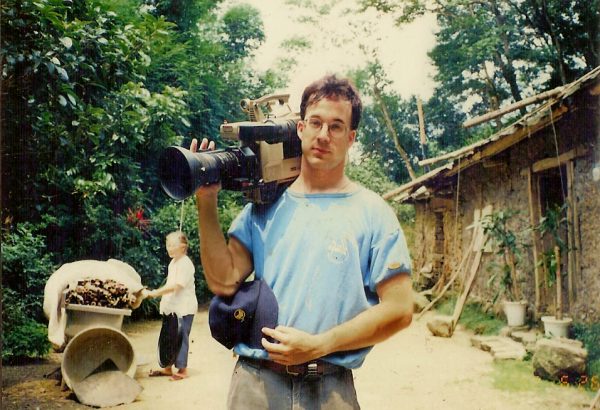 You are now an accomplished filmmaker, photographer, and musician. Do you think Taiwan has shaped your work? If so, how?

I think it would be extraordinary if Taiwan hadn’t shaped my work, but it is difficult to elaborate on just how it has, as that is a very subjective thing to judge…. I can only offer the fact that my outlook comes from Taiwan, i.e. this is the place I see the world from, though of course my U.S. upbringing informs my work as well. That said, filmmaking and music tend to be collaborative efforts and don’t reflect my personal standpoint as much as my writing and photography.

How would you describe your photographic work? What attracts you about photography in Taiwan?

My work tends to describe life from a natural standpoint. I don’t set things up or create or try to influence what I’m seeing, but rather remain open to revealing scenes and situations that I feel might be made into compelling, candid photographs. I enjoy photographing in Taiwan not only because it is my country, but also because the overlap between the public and the personal here allows for fascinating, telling observations of this society. Taiwan is very dense, culturally, socially and geographically, and I am particularly attracted to the haphazard beauty that sometimes appears, unbidden, from the “pragmatic chaos” in which everyone here is swept up as a result of this density.

What has life in Taiwan been like since you left  the army?

I was honorably discharged in early 1998, so it’s been quite a period of time. I’ve worked several jobs since then, continuing at the TV station where I’d been a cameraman before I entered the service, before moving into newspaper and media work. I made a feature film in the mid-2000s, which was around the time I joined the Muddy Basin Ramblers, and we’ve put out two successful albums, one of which was nominated for a Grammy, and we are now working on recording our third. I’ve exhibited my photography in the UK, France, China, and Japan, as well as here in Taiwan, and I’ve been a member of the Burn My Eye Collective since its founding in 2011. I’ve traveled to many places in and out of Taiwan, and settled down in a small apartment in Hsin-tien [in Taipei] that I bought over a decade ago. I’ve participated in some reserve activities in recent years as well. And of course I published two books on my experiences in the army, one in Chinese in 2002 and one in English in 2014. 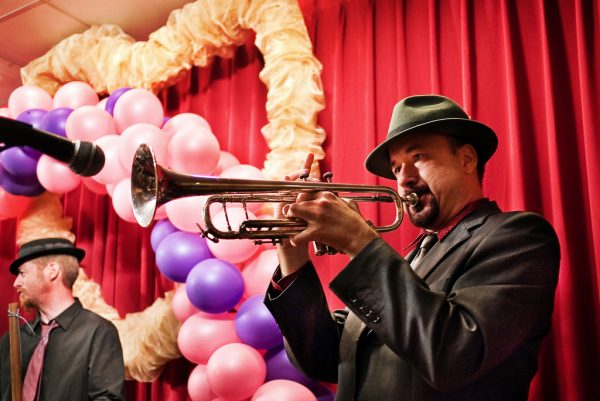 What messages would you give to Americans who are interested in learning about Taiwan?

By all means, come take a look. But if you do, try to keep an open mind. Things are done differently here, and that’s not necessarily a bad thing.