FAPA member and young scholar, Mr. David Chen ( 陳立偉), has published a handbook of Romanized Taiwanese & Hokkien. This is an excellent handbook for our 2nd generation to learn Taiwanese. This book is already on the Xlibris bookstore website and should be available for purchase on Barnes and Noble and Amazon:

Taiwanese and Amoy Hokkien are languages that developed as hybrids of Zhangzhou and Quanzhou dialects both in the City of Xiamen (Amoy) and in Taiwan. Hokkien, along with the related Teochew language, are amongst the most widely spoken Chinese languages overseas along with Standard Mandarin, Cantonese, Hakka, and Shanghainese. There is a limiting belief that Taiwanese and Hokkien are just spoken an not written, and that language can only be passed down orally. Most language learning resources available target Mandarin speakers and some target English speakers. However, many forms of Taiwanese Romanization exist and create confusion and discouragement to people wanting to learn the language. Also most books that discuss phonetics and tones in Taiwanese and Hokkien languages target Mandarin speakers literate in traditional Chinese characters. The Handbook of Romanized Taiwanese & Hokkien is for English speakers and acts as a guide that discusses the phonetic and tone structure of Taiwanese Hokkien vocabulary and five of the most common forms of Taiwanese Romanization. With several Taiwanese language instruction books available, this book covers basics on reading and pronunciation of Taiwanese Romanization regardless of which Romanization is being used. This book does not replace learning Taiwanese through conversations and interactions with people, but is a guide for teachers, parents, and students to enhance their learning of Taiwanese and as a teaching tool to pass down to next generations. This book focuses more on Taiwanese and Amoy Hokkien but provides a basic foundation in phonetics and tones that can be applied to other Hokkien dialects.

David L. Chen is a Taiwanese American whose family immigrated to United States in the mid-1970’s when he was almost two years old. He was exposed to both Taiwanese and Mandarin languages growing up. Growing up in a Taiwanese American community reinforced the importance of cultural identity and language. His first foreign language was Mandarin during the elementary and junior high school years through Saturday Mandarin “Chinese” schools, which became popular in the 1980’s and are now mainstream. These classes introduced him to basic Chinese language grammar structure and the importance of written traditional Chinese characters, phonetics, and tones. Learning Standard Mandarin and written Chinese characters provided him language tools that he applied when visiting relatives in Taiwan. He took Japanese language in high school for his foreign language requirement and also applied the tools he learned from the previous Mandarin courses. He obtained a Bachelors of Science in Civil & Environmental Engineering from University of Washington (UW) and later obtained his Masters of Science in Civil & Environmental Engineering from University of California, Irvine (UCI) where he also took some freshman Mandarin courses. He always recognized Taiwanese language as the mother tongue of Taiwanese people, especially communities overseas, and is currently applying his language experiences from learning Mandarin and Japanese to developing Taiwanese language materials for overseas Taiwanese youth. He is currently resides in Southern California. 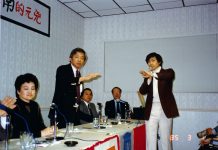