During the 1930’s the United States was not open to immigration by citizens of any Asian country and barred the naturalization route to American citizenship until the Magnuson Act of  December 17, 1943. In that period, a few Formosans, their land having been occupied by Japan since 1895, entered the United States as students with Japanese passports and with Japanese names. In the case of our father he eventually became a naturalized United States citizen.

Khe-Beng Chiong, our father was born in Kongkuan(公館), Miaoli(苗栗) , Formosa on April 11, 1912.  His father, Chiong Tian-Ki (鍾天枝) had a ministry in Miaoli .  His family moved to Tamsui (淡水) in 1917 where his father was first pastor at the Tamsui Presbyterian Church (淡水長老教會)until 1935.  Khe-Beng was the 5th child and first son.  Around 1927 at age 15 he left Formosa for Kyoto, Japan to attend Doshisha Academy(同志社學院), a preparatory school associated with Doshisha University(同志社大學), which was a Christian university.  He received his diploma on March 22, 1931.

He returned to Formosa and obtained a Japanese passport with his last name written with the Japanese pronunciation, Keimer Sho.  He applied for a visa to study in the United States at Whitman College in the state of Washington. He sailed from Yokohama(横滨), Japan on March 10, 1932  and arrived in Seattle, Washington on March 23, 1932.

Studies in the USA

He began his freshman year at Whitman College, a private liberal arts college located in Walla Walla, Washington.  He graduated in 1938 with an A.B. in Chemistry.

After graduation from Whitman College he attended the University of Chicago, completing one and a half years in Chemistry.  It was there at the beginning of the 1939-40 academic year that by chance he met a classmate who had graduated with him from Doshisha Academy in Kyoto. The story is that Aichi Tsai crossed paths with him on campus a few times then asked him if he was Khe-Beng.  It was indeed a fortuitous meeting.  Aichi Tsai invited Khe-Beng to room with him and they enjoyed cooking together along with four Japanese students two of whom also came from Doshisha Seminary. During the summer they both worked as waiters at the St. Louis Country Club in St. Louis, Missouri.  In 1941 Khe-Beng transferred to Purdue University in West Lafayette, Indiana and continued his studies in chemistry for another year.

In 1942 through Aichi Tsai, he met Anna Fumi Morikawa.  Her sister, Ryo Morikawa,  had recently become engaged to Aichi Tsai.  The Morikawa family had originally come from southern California but being of Japanese ancestry our mother’s family had been forced to move due to Executive Order 9066 which removed all persons of Japanese ancestry from the west coast.  They married on December 6, 1944.

December 4, 1942 he was drafted into the US Army as a private.  His unique background and fluency in the Japanese language were recognized as valuable to the US army now engaged in a war with Japan.

After basic training at Fort McClellan, Alabama he was assigned duties as interpreter in Prisoner of War Processing at Fort Custer, Michigan.  After this he was ordered to New Caledonia in the South Pacific to take charge of an interpreter-translator unit in Prisoner of War administration. He served in Noumea, New Caledonia from October 1943 until November 1944. On April 1, 1944 while serving in New Caledonia he became a naturalized United States citizen. The Magnuson Act, allowed ethnic Chinese, regardless of national origin, residing in the United States to become naturalized citizens reversing a policy that had been in place for decades.

In November of 1944 he was selected for the Language School at Fort Snelling, Minnesota and assigned to Military Intelligence. He was then elected for officer candidate school and commissioned a Second Lieutenant on December 15, 1945.

In April 1946 he was sent to serve at General MacArthur’s Headquarters in occupied Japan.

Through the war years our father was deeply concerned about events in Asia and the fate of Formosa.  We were made aware of this by the many newspaper articles he kept about Formosa and events in mainland China. Now having arrived in Japan he made many attempts to visit Formosa on a US army mission. In the summer of 1946 permission was finally granted.  On July 6, 1946 he left Tokyo for a 1000 mile trip to Shanghai on a C-46 military plane with only two passengers, he and another lieutenant.  He was to arrest a Japanese war criminal living in Takao (Kaohsiong, 高雄) and take him back to Tokyo.  He was to wait in Shanghai for clearance from the Chinese government before flying to Formosa. This clearance would have to be obtained within four days or the trip would be canceled.  Meanwhile, he was anxious to see his parents and brothers and sisters whom he had not seen for almost 15 years.  “my mother has little eyesight left.  I wonder (if) she can recognize me.” he wrote.

He was able to make the trip to Takao(ｸﾟﾐﾛ ) on the US military plane.  He writes:

“When we arrived in Taihoku (ﾌｨｱｱ), there were 3 U.S. Army officers waiting for us.  They are in Formosa under the mission called Grave Registration Team.  American Consulate people were there too.  Kerr took me to one of my sister(s) home and then to my father and other sisters…..”

For two nights the family talked and shared their struggles during the war and after that there was laughter and joy. The trip to Formosa lasted only 64 hours.

Our mother, Anna and baby daughter, Bi-Lan joined him in Tokyo in November 1946.

Our father served in the US Army until 1954.  He was drafted as a private and later promoted to sergeant. Later he was commissioned as 2nd then 1st Lieutenant.  He was promoted to the rank of Captain on December 18, 1951.

In Tokyo, Japan, he worked in Counter Intelligence Corps CIC therefore we do not know exactly what his work entailed. A letter of commendation dated 1950 describes some of his work:

“First Lieutenant KHE-BENG CHIONG, 01339844, Infantry, United States Army, distinguished himself by meritorious service with 7th District, 441 Counter Intelligence Corps Detachment, in Japan, from 27 June to 2 November 1950.  Demonstrating unusual ingenuity and initiative, Lieutenant CHIONG secured and evaluated vital information which led to the eventual apprehension of a large North Korean espionage ring in Japan.  Displaying a thorough knowledge of investigative techniques and superior linguistic ability, he expertly conducted and coordinated a large informant network which collected valuable information and skillfully directed the translation, collation and preparation of reports which contributed materially to the success of the corps’ mission in support of the United Nations’ Korean campaign.  Lieutenant Chiong’s assiduous efforts and remarkable achievements reflect credit on himself and the military service.”

Life as a Private Citizen in Tokyo

After leaving military service and undergoing extensive debriefing in Washington DC, he went into private business in Tokyo, Japan. He was the Export Manager for Kawaguchi Rubber Company.  Later, he began his own export business called Plastic Products Company.  The office was adjacent to the family home in Tokyo.

At age 46 he became ill for 6 months or so and was cared for at home by his wife and family.  He was also attended by his physician, Dr. Lin Tomoku, whom he had known since his Doshisha Academy days.  He died peacefully at home on March 9th 1958.  Surviving were his wife Anna, Bi-Lan(美蘭), age 12, Chu-Lan(慈蘭) age 10 and Mei-Lan(梅蘭), 6 months old.  The family stayed in Tokyo for another 5 years then moved to Seattle, Washington.

Our father came from a deeply Christian family in Formosa.  His adventurous spirit brought him to the United States to pursue studies in Chemistry.  Due to circumstances of the times he was drafted into the US army and with his valuable language and communication skills was able to contribute significantly to the war effort.

Our father was warm-hearted person so loved by all who he encountered in life.  Perhaps it was that special Formosan character that radiated from him and inspired joy all around him.

(Lt. Khe Beng Chiong in his M-1 combat helmet at Fort Benning, GA , in Dec. 1945; by courtesy of Ms. Chulan Chiong and her siblings) 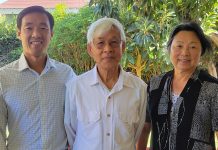